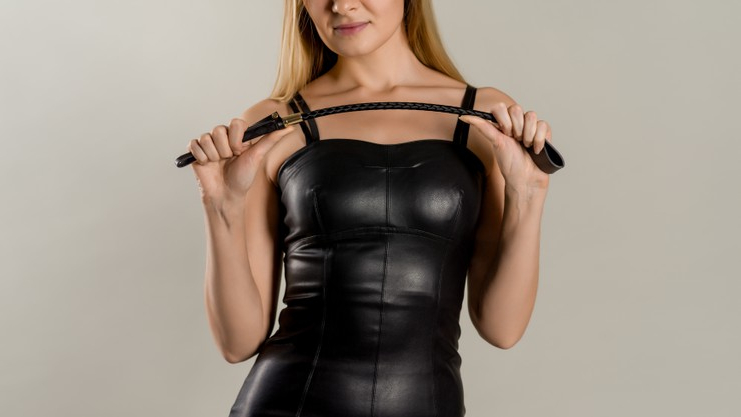 Before you read this, truly consider if you really want to know his deepest fantasies. Once you know, you cannot reverse what you have learned. On the internet he fantasizes about fetish porn with thousands of models. He participates in observing images, stories and videos that are either free or quite costly. Most of us are already aware of fetishes, fantasies and kinks which we willingly incorporate them in our sex play to some level. Many of us want more but there are lots of women who don’t know any kinks at all and may be better off not knowing.

Make no mistake, he has a fantasy about female led relationships and it is very likely FemDom (a term meaning female domination see glossary). The fantasy starts with him being less than her; she may be his ruler, queen, mistress, goddess or any number or domineering female titles. “Less” to him means She gets uppercase and he is lowercase She/he. It is a Dominant/submissive or Mistress/slave relationship. She can command him and he must obey or punishment will occur. In his fantasy, she is demanding, strict, beautiful, sexy, sadistic and powerful. He will have certain individualized fetishes such as how she treats him, what she wears, how he must behave and what kind of sex happens. By the time you learn about his interest in female led relationships he has spent a long time thinking about it, has seen hundreds maybe thousands of images, and has masturbated in secret about his fantasy many times. The fantasy has several key elements.

Are there any men who want female led relationships that are not extreme?

We don’t know any but likely, there are. We suspect they had a dominant mother that used physical punishment up until the point when they left the home. We do know of young men who have been in lifestyle BSDM but don’t know much about them as they are subs and closely kept. Your man may be the exception, it is not clear.

Having fantasies does not make one sick. He might be sick if you notice some of signs of sickness but the fantasy he has, no matter how extreme, does not qualify as sickness. He very likely has rational reasons for his desires; those desires are defiantly outside the norm. 80% of all people fall in the norm, and most of his life he is in the norm too, but this falls in the 10% off the deep end. Think about his fantasy from your woman’s perspective on fantasies, many women have a rape/force fantasy and some women role play to get it. How normal is enjoying the idea of rape? This is the same self-confident cocky man who is successful in many ways. He is having these thoughts and acting on them. Your bad boy! He is, like most men, a reasonable guy. He realizes giving up control has a cost and getting his fantasy will have a cost he must be willing to pay.

“Fantasies are not frivolous. They can be entertaining, distracting, frightening, even arousing, but they also allow for creativity and help us plan for the future. As long as we don’t mistake fantasies for reality”

He fantasizes about – her exerting power over him including humiliation and punishment.

His fantasy may include any or all of these: being naked when the woman is clothed, kneeling at her feet, performing sex acts on demand, bowing to her, kissing her feet, wearing a collar, being held in chains, having to obey her at all times, being in bondage so he cannot resist, being teased sexually, being whipped, being tortured, being caged, being leashed (led by a leash), being kept in a dungeon, being one of many slaves, being required to dress in women’s clothes, being required to dress in only an apron, addressing her as “Goddess”/”Mistress”/”My Queen”; her forcing him to submit sexually “her giving him anal sex with a strap on device”, “being forced to service her friends or other lovers sexually”, “being ordered to have sex with a man while she watches”. Sexual chastity, wearing a chastity devise, prostate milking, and orgasm denial. Being slapped in the face, spanking, corner time out, genital torture, required to wear genital fetish wear, forced to wear a butt plug.

He fantasizes about – her interest level being very high and she is confident. She wants it.

He wants his fantasy to desire the relationship more than he does, to drive it and make it happen, to captivate him. She is sure of herself, she talks down to him, commanding him and belittling him to remind him of his place. Yes she puts him in his place, “naked, at her feet”. Depending on his, preference she may wear long flowing fairy or goddess clothing; she may wear sexy, tight, or leather outfits; she may wear motherly or business attire. In his fantasy she makes him want to surrender and serve. He has a fantasy that she has sadistic desires.

He fantasizes about – Sex and/or sexual control especially fetish sex, props and costumes.

Her power is enhanced by being able to control his orgasms. She denies him pleasure, teases him – sometimes painfully. She flaunts her power and control with whips, riding crops, canes, and her, many ways of restraining him. She may have sex with others while he is teased sexually and forced to watch then denied pleasure. She is in complete control of his sex and pleasure.

He fantasizes about – his willingness to give up control to her.

He fantasizes about – his level of high interest in her body and serving her as a woman.

He is interested in the woman’s body; it turns him on because it is so different from his and a little mysterious. He wants contact, especially when she demands it. He wants to serve her every desire from fetching her slippers to providing oral sex on demand, all while he is naked. He want to bath her, dry her and put lotion on her body, help her dress and undress. He wants her to dress in her sexy attire (differs from man to man). He wants to be his fantasy’s personal butler. Some men want to wait on/serve women using the toilet or menstruating. He is interested in all things female especially in ways he feels are private.

How should I respond?

You may be hot right now or may be thinking “icky”, but it is up to you how to respond. Most women want to please their guys at some level, but most women won’t do many things in his fantasy. It is just a fantasy right? We recommend you make a decision. This decision will be followed up by more decisions.

Can he just be happy without this?

Most men cycle in and out of fantasies but they seem to reoccur and he may never get over it. Yes he can live without it but he will feel unfulfilled and likely spend more time pursuing it without you.

Can I participate just where I want?

It is possible. Keep in mind however, that there will always be some minimum and he wants to feel he is making progress. If you have an interest in female led relationships, chances are you are also interested in some of his fantasies and can try to participate where you feel comfortable.

What is FLR? – Female Led Relationship