How many men and women really participate in female led relationships?

The numbers will surprise everyone. There is no formal data from census on FLR participation but we have a few other ways to judge the participation. Book sales on the subject, the newness of website content and the number of websites participating on the subject. We have keyword searches on female led relationships and related phrases plus posts to blogs. Those that developed this site are experts on statistical data and internet usage.

Why does this site exist?

Who participates in this site?

This site was basically written by 4 women and 1 man. by Jan 2011 thousands have participated in the project. Participation is open but monitored. We are and cater to intelligent people who want intelligent direction and answers. The content was written from a middle aged woman’s perspective for women to read. Men readers can use this as a resource for their mates and are welcome to participate.

Can I participate anonymously?

Read away, take the quizzes, participate in the polls and contribute comments. All comments are screened by software and a human. If you register and confirm yourself as a woman you may dialog without censorship using a screen name.

We will need to make a relationship first. This site is protected because we want it to remain as a credible resource. If you are an expert or have expertise on some of the topics we encourage your contact (contact the admin). Users may participate at anytime.

Do you have personal ads?

Do you allow advertising?

Sometimes called a bull or stud is a male serving a woman as her primary lover in relationships where she has more than one male servant.

A male who has become or has been reprogrammed to be a second male in a womans life – most often submissive and gentile.

power to direct or determine; “under control” — a relation of constraint of one entity by another; — exercise authoritative control or power over; “control the budget”; — the activity of managing or exerting control over something; “the control of the mob by the police was admirable”. — dominance: the state that exists when one person or group has power over another; “her apparent dominance of her husband was really her attempt to make him pay attention to her” — command: great skillfulness and knowledge of some subject or activity; “a good command of the subject.”

Is a term used in pornography to describe when a male ejaculates inside his partner’s anus or vagina. The term also refers to the visible seeping or dripping of semen from the anus or vagina. Scenes of this type have become common in both male homosexual and heterosexual pornography since the turn of the century. [wikipedia]

In the realm of FLR ‘desexualized’ means limiting or removing his access to sexual release and changing his socialization and sexuality. This can be as simple as chastity, orgasm denial and use of numbing creams or thick condoms or a great as reversing his sexuality from predator to prey.

One mate punishing another – usually by spanking, some kind of whipping and or time out.

Ruling over a sub – in this case commanding a sub to do things.

Any relationship based on a the principles where both partner have equal decision making power – they make decisions together. Sometimes called 50/50 relationship.

Any form of females control, leadership or management of a relationship with her man. 1. where she is leading, 2. where he is willfully following, 3) both acknowledge their roles.

A form of kink which includes obedience and acts of worship such as foot worship, bowing, servant like behavior – one form of worship is tribute where the goddess gets paid by the worshiper.

The type of relationship that happens “on the rebound” where people look to fill needs they did not get in a past relationship. Also called a transitional relationship.

One who has at-least one follower.

leader – a person who rules or guides or inspires others — the activity of leading; the status of a leader; the ability to lead;

manage – be in charge of, act on, or dispose of — oversee: watch and direct — do: carry on or function.

One mate punishing another – usually by spanking, some kind of whipping and/or time out.

Submitting to a the will of another (volunteering), sometimes called willful compliance.

Any based on a term of tradition such as male Head of Household (HoH). A relationship based on religious principles or traditional core values..

Any relationship where one partner had more decision making authority than another.

Getting him to talk

I think we are all aware that guys are not good at sharing their feelings. To fully understand where he is emotionally, you will need to create an atmosphere where he can be vulnerable and you can remain supportive of his coming clean to you. Remember he is asking for your help and your leadership so don’t wait to take charge; just make it happen and assume he will follow. If he does not follow, don’t shrink away or show frustration. Remind him that he wants your leadership and it would give you confidence if he would follow your lead in this effort to understand him. Tell him you want to “have a serious talk” about FLR and when you want it to happen.

Ask if he would like to talk about it. Make a date to meet. Set up a room where you both can talk freely – the bedroom perhaps. Light one small candle so the room is dim. Sometime before the discussion give him a hand written note with a few instructions on it (playing to his desires). Instruct him to shower and come to you naked and when he arrives you want him to stand at attention with his hands behind his back and his head slightly lowered. This will play to his desires but not commit you to anything just yet. Prepare yourself with questions from your intuition about him or from things he has shared in the past. This is your first meeting so make sure your leadership helps move the process forward and does not derail it.

Setting the mood for his fantasy will help you get information out of him that he would not have shared otherwise. You must remain clothed like you were dressed for work. A flattering skirt or dress is best. Showing your legs is important to his sense of fantasy. Style your hair. When he arrives, remind him to stand at attention and keep his hands behind his back, not to attempt to touch you until you ask. Spend sometime kissing and fondling so he is aroused. His mind is now on his body and you so you have him focused and slightly disarmed.

Things you should ask in the first meeting

You may be blown away. You may be hot. You may be disgusted. Women react differently and to what their men confess. Keep in mind, you don’t have the full story yet.

Keeping your relationship vital – Things you should keep asking

Okay, now what? You have some answers. You may need to spend some time licking your wounds. Most of all, you will need to decide if you still want him or not. You can approach him and say you don’t want anything to do with FLR but that wont solve the issues created by his desires. You are in a relationship, that takes two and at least one of you is looking for FLR. We recommend follow-up discussions with your mate — discussions could lead to:

Discussion may be hard work for some women and may be a pleasure for others. After all when is the last time you had an intimate conversation with him where he was vulnerable to you. If you want it to happen, it will because you can make it so? 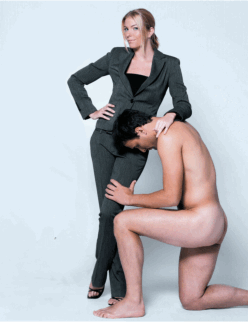 Bowing and curtsying used to be a public display acknowledging one persons submission to another. The deeper the bow the greater the submission. FLR women seem to want this revived. The scores go down when it is done in public by as much as 30%; which says women want the respect shown to them in their private lives or among close company. To me this is hot and useful. Hot because he is down at my feet and useful as it describes our relationship.

No more pages to load