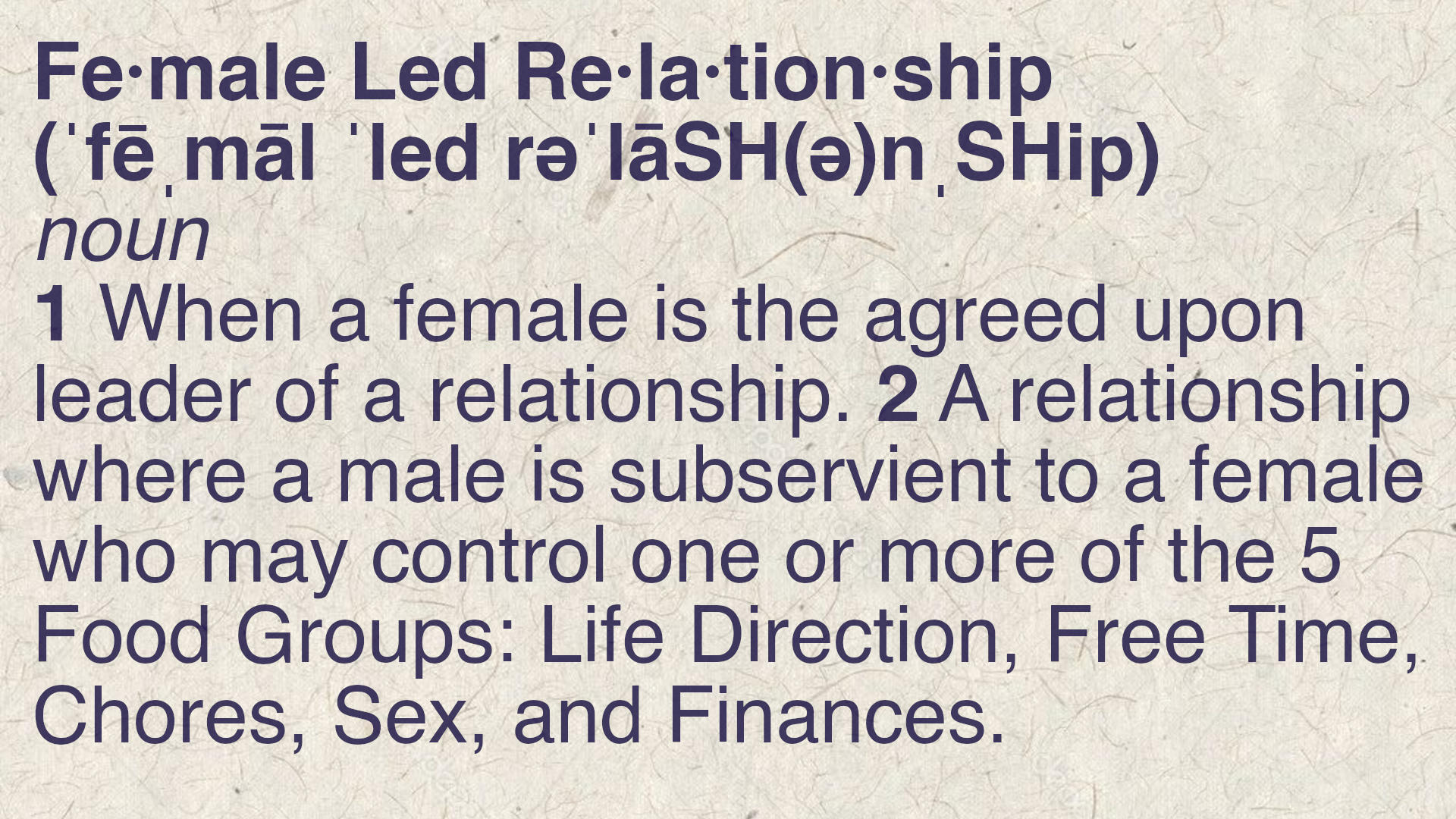 Sometimes called a bull or stud is a male serving a woman as her primary lover in relationships where she has more than one male servant.

A male who has become or has been reprogrammed to be a second male in a womans life – most often submissive and gentile.

power to direct or determine; “under control” — a relation of constraint of one entity by another; — exercise authoritative control or power over; “control the budget”; — the activity of managing or exerting control over something; “the control of the mob by the police was admirable”. — dominance: the state that exists when one person or group has power over another; “her apparent dominance of her husband was really her attempt to make him pay attention to her” — command: great skillfulness and knowledge of some subject or activity; “a good command of the subject.”

Is a term used in pornography to describe when a male ejaculates inside his partner’s anus or vagina. The term also refers to the visible seeping or dripping of semen from the anus or vagina. Scenes of this type have become common in both male homosexual and heterosexual pornography since the turn of the century. [wikipedia]

In the realm of FLR ‘desexualized’ means limiting or removing his access to sexual release and changing his socialization and sexuality. This can be as simple as chastity, orgasm denial and use of numbing creams or thick condoms or a great as reversing his sexuality from predator to prey.

One mate punishing another – usually by spanking, some kind of whipping and or time out.

Ruling over a sub – in this case commanding a sub to do things.

Any relationship based on a the principles where both partner have equal decision making power – they make decisions together. Sometimes called 50/50 relationship.

Any form of females control, leadership or management of a relationship with her man. 1. where she is leading, 2. where he is willfully following, 3) both acknowledge their roles.

A form of kink which includes obedience and acts of worship such as foot worship, bowing, servant like behavior – one form of worship is tribute where the goddess gets paid by the worshiper.

The type of relationship that happens “on the rebound” where people look to fill needs they did not get in a past relationship. Also called a transitional relationship.

One who has at-least one follower.

leader – a person who rules or guides or inspires others — the activity of leading; the status of a leader; the ability to lead;

manage – be in charge of, act on, or dispose of — oversee: watch and direct — do: carry on or function.

One mate punishing another – usually by spanking, some kind of whipping and/or time out.

Submitting to a the will of another (volunteering), sometimes called willful compliance.

Any based on a term of tradition such as male Head of Household (HoH). A relationship based on religious principles or traditional core values..

Any relationship where one partner had more decision making authority than another.

AboutFLR.com is Looking for Paid and Volunteer Help